The Minister of People’s Power for Foreign Relations, Jorge Arreaza, denounced that various “satellite” governments of the US administration seek to encourage a war against Venezuela “by inventing aggression lists”, as he pointed out.
In response to the declaration of foreign ministers of the Organization of American States (OAS), the Venezuelan diplomat said that the United States and its satellite countries, mired in popular mobilizations against neoliberal policies, «cannot find what more to invent» in their eagerness to attack Venezuela.
«While they suffer governance crisis, popular anti-neo-liberal rebellions and their imaginary para-government crumbles in Venezuela … They create useless lists to attack our homeland with an instrument of war», Arreaza said through the Twitter network.
On Tuesday, a group of Chancellors of the OAS participated in the 30th Consultation Meeting to serve as the Consultative Body in Application of the Inter-American Treaty of Reciprocal Assistance (TIAR), which pro-tempore presidency is being exerted by Colombia.
The meeting was held in the capital of Colombia, Bogotá, with the intention of promoting the application of said mechanism against Venezuela, a treaty of which the country is no longer part. 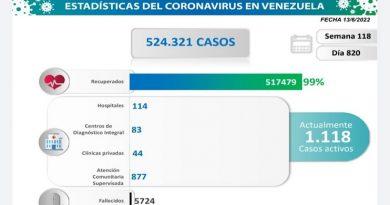 Maduro: Winning the battle for the right to peace and life is the second great task of 2017

287 new Covid 19 cases were registered this Sunday in Venezuela