Venezuela will strengthen an agreement for military technology transfer with China, with the purpose of ensuring the maintenance of equipment belonging to the Bolivarian National Armed Forces (FANB), said the president of the National Constituent Assembly (ANC) Diosdado Cabello, during an official visit to the Asian country

During the «Nos vemos en la radio» (See you on the radio) program, broadcast by Radio Nacional de Venezuela, he said that this cooperation will guarantee the safeguard of territorial defense, given the pretenses of an armed intervention by the United States and its satellite governments:

«Those who attack us and those who believe that it would be very easy to enter Venezuela and sweep with our people, are going to have a big surprise because one of the reasons for our visit to China is to find that these agreements seal the possibility of improving our weapons» said Cabello.

Another objective of his visit to China, coordinated by the President of the Republic, Nicolás Maduro, is to strengthen ties with the nation for the formation of political cadres.

He explained that the meetings expressed the interest of the Bolivarian Government so that “instructors, academics and professionals can help us shape and make sense of a great plan that goes beyond the immediate, but a long term one for Venezuela to remain being an example, not only politically, but also economically throughout the Americas».

Cabello: Xenophobia against Venezuelans is a consequence of the campaign by Ravell and Borges 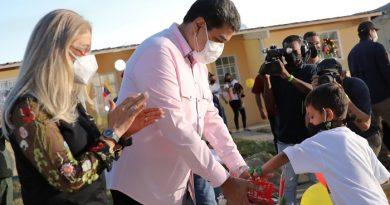 New management model: Direct connection with the regions will be implemented by the Executive in 2022