President Nicolás Maduro instructed on Monday that the school classes start-up agenda has to be intense.
In an act from Miraflores Palace in which was celebrated the beginning of the 2019-2020 school term, he encouraged the competent authorities in the matter to specify said objective:
“The school classes start-up agenda has to be intense, Aristobulo; César Trómpiz; Executive Vice President Delcy Rodríguez; Minister for Culture (Ernesto Villegas) ”, urged the President while giving this instruction.
The call was made by the Head of State after establishing satellite contacts with Trujillo and Monagas states, for the inauguration of new educational units.
On Monday, the Pedro Alexander Torrealba Educational Unit School was inaugurated in the Capellanias sector, Cruz Carrillo Parish, Trujillo State.
There, the governor of the entity, Henry Rangel Silva, along with the mayor of the Trujillo municipality, Arguerson Hernández; the director of the Pedro Alexander Torrealba Educational Unit school, Nulbia Torres, said that the children started the school year successfully.
For her part, Nulbia Torres thanked for this new infrastructure that will benefit 114 students from five sectors and surrounding communities:
«The children received their beds, bags, they have their diner halls … we are proud to be Trujillanos and belong to a country like Venezuela».
The President did the same when establishing a contact with Monagas state, in Caripito, where Governor Yelitze Santaella, from the Hugo Rafael Chávez Frías Special Educational Unit, said that this space starts today with 78 special girls and have also been created 16 new positions for teachers and processing mothers.

Brownfield statements against Venezuela are an act against humanity

President Maduro: Terrorist attack against the SEN was carried out by a sniper 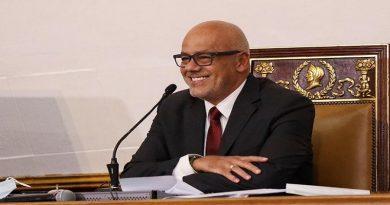 No one can pretend to install a parallel state in Venezuela