The Executive Vice President of the Republic, Aristobulo Isturiz, condemned on Thursday the recent statements by the US President, Barack Obama, who during the Summit of North American Leaders held in Canada, said that in Venezuela must be held a recall referendum that is consistent with the laws of the country.
«Obama keeps believing that this (Venezuela) is his backyard (…) he has not realized that this is a country that has the same rights as the United States. If we respect them, they must respect Venezuela», said Isturiz from Pdvsa La Campiña in Caracas, where is developing the first Expo-fair of Mission Ribas.
He also noted that the US Government has two sides, since while President Nicolas Maduro was meeting with Thomas Shannon, they asked at the OAS an intervention to Venezuela. «The empire is directing all its offensive against Venezuela», he said. 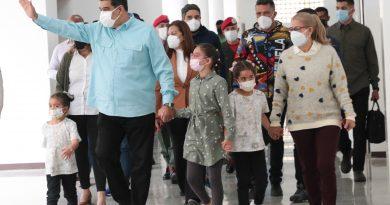 Carmen Meléndez: We must get to where the most vulnerable families are

Ombudsman calls for peace and to cease violent demonstrations

Diaz on corruption in PDVSA: They tried to implode the main industry of the country