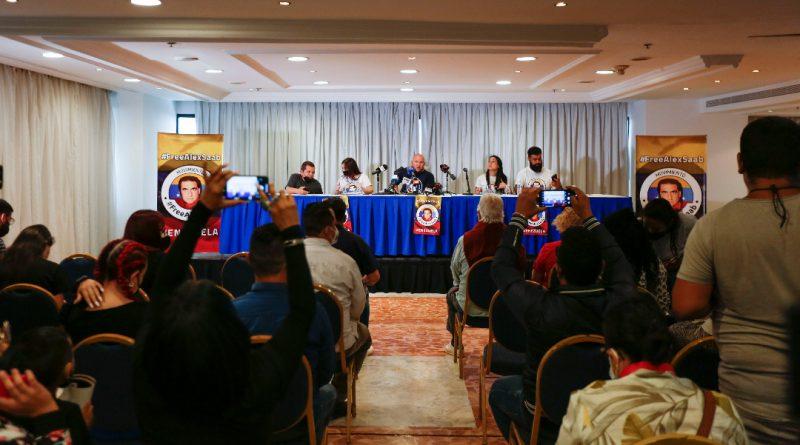 This Monday, the Free Alex Saab Movement issued a statement to demand the freedom of Venezuelan diplomat Alex Saab through a humanitarian exchange agreed between the governments of Venezuela and the United States, taking advantage of the fact that the relatives of American detainees in Venezuelan territory are demanding President Joe Biden to make every effort to bring these citizens home.

In the statement, the movement reiterates that the Venezuelan Executive has made enough gestures that demonstrate its willingness to move forward in this direction and thus de-escalate the conflict. Likewise, it demands the cessation of the media, legal and political persecution of which Alex Saab has been a victim since, even, before being kidnapped in Cape Verde.

“We welcome the attendance of the media present. Today we want to make clear the position of the Movement regarding several aspects that have to do with the case of the Venezuelan diplomat Alex Saab, illegally detained since June 12, 2020 and that despite having shown all the evidence that accredits him as Diplomat, he is held captive by his kidnappers.

We must emphasize that the lawyers are making an impeccable defense that if international laws and norms are really respected in the United States, they will have no other option than to sentence the immediate release of the Venezuelan diplomat Alex Saab. But we know that we are facing a case that starts from the political motivations of the United States against the democracy of Venezuela and that is outside international law and the United States Diplomatic Relations Law itself, which also protects diplomatic immunity.

This week the defense team of the Venezuelan diplomat expects to begin receiving documents that are in the possession of the Department of Justice and other agencies of the US government, after the Judge handling the case ordered it in the last hearing. of July 15.

We are sure that in these communications we will find evidence of how they systematically violated the law since June 12, 2020 to keep him kidnapped despite the immediate claim that Venezuela exercised for his status as Special Envoy on a Diplomatic Mission, as well as his lawyers and other countries. We firmly believe, as stated in the book by the former Secretary of Defense of the United States «A Sacred Oath» that the United States was fully aware of the high-level diplomatic missions that Diplomat Alex Saab had been carrying out.

This case will surely go down in the history of International Law and Diplomatic Relations because the United States has violated an existing principle for centuries by kidnapping a diplomatic official. This serious violation of Customary International Law, which has governed nations since the beginning of diplomacy, created a serious world precedent that must end immediately.

Another element that seems important to highlight for our Movement was the creation of the Executive Order approved by the Administration of President Joe Biden, on July 19, 2022, in which the paths are opened to ensure the return of US citizens who have committed crimes in other countries. We as a Movement are open to any form of solution to the kidnapping of our compatriot Alex Saab, and even more so if it has a humanitarian background, which will return peace to the families who demand the return of their loved ones to their homes.

We want to end by endorsing the words of President Nicolás Maduro when he said “We have always carried Peace as a flag in the face of violence and war that they try to impose on the world. We are faithful believers in the path of dialogue, reconciliation and respect. It is the only way to solve our problems”.”

President Maduro: Maradona was loyal to the revolutionary cause of Venezuela

Petro will counteract the sanctions imposed on Venezuela