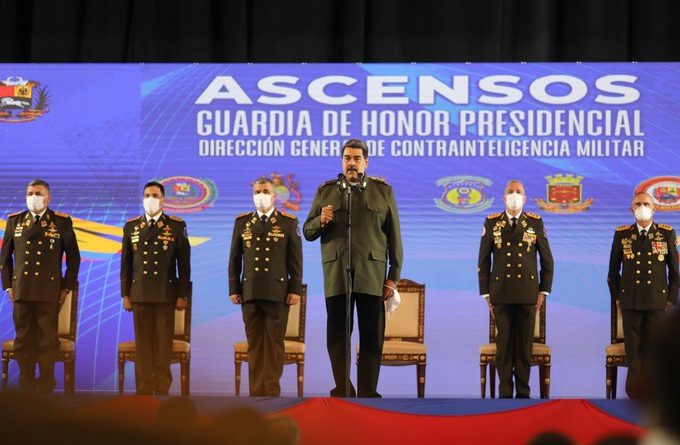 The Venezuelan Head of State, Nicolás Maduro, denounced this Saturday that the outgoing president of Colombia, Iván Duque, maintains «terrorist plans and attacks against the electrical system, personalities and political leaders of Venezuela”.

From the Theater of the Military Academy of Venezuela, in Fort Tiuna in Caracas, the National President assured that «in his impotence, his hatred and his defeat, Iván Duque wants to take revenge on Venezuela, that is why we must keep our guard up».

In this regard, he warned that these terrorist plans and attacks go against “the electrical system, personalities and political leaders of Venezuela”.

For this reason, he instructed the men and women who make up the Presidential Honor Guard and the General Directorate of Military Counterintelligence, not to lower their guard against the terrorist threats that surround Venezuela.

Promotion to the rank and immediate superior hierarchy:

Congratulating the officers and personnel of the FANB who today received their well-deserved promotion to the immediately superior rank and hierarchy, he emphasized that «You, men and women, are the greatest guarantee of peace, stability, security and life of the Homeland.»

In his capacity as Commander-in-Chief of the Bolivarian National Armed Forces, FANB, President Nicolás Maduro authorized the promotion to higher rank and hierarchy of 15,150 FANB Officers and Professional Troops throughout the country.

In his words, he recalled that Venezuela has taken the path of recovery, «it is getting up step by step and our FANB was at the side of the people in the hardest years, the crack of social and economic resistance.»

“The FANB is at the forefront, together with the people, in this process of growth, recovery and construction of the powerful Venezuela”, he commented.

Venezuela met 120% goal of the Opec and Non-Opec agreement

Great mining reserve! Venezuela could have 7000 tons of gold

President Maduro: The only path Venezuela needs is that of dialogue

Vice President Delcy Rodríguez, calls for the cessation of repression against the Chilean people