This Monday, the members of the National Assembly paid tribute, in the Elliptical room of the Federal Legislative Palace, to the journalist, writer and deputy Earle Herrera, who died this Sunday at the age of 72.

Herrera received the honors of the burning chapel, during which his legacy as an upright man and a full-fledged revolutionary was acknowledged.

The coffin with his mortal remains was transferred by the cadet corps of the Bolivarian Military Academy, accompanied by the train of parliament deputies, and the ceremony was attended by priest and journalist Numa Molina.

Jorge Rodríguez: We are dismayed:

In his words during the ceremony, the president of the AN expressed: «We are dismayed, furiously trying to appeal to your perennial smile, your flashing phrase and your hoarse voice greeting us: ‘What’s up, poet?’ «.

«You left too early brother, because every morning there was a chronicle, there was a phrase,» he said, recalling that until last Wednesday he attended the parliamentary seat.

“He was a young journalist who was in the lecture hall on July 26, 1976, when my father Jorge Rodríguez was being bid farewell. A young journalist who I have no doubt in considering the Andrés Eloy Blanco of this time, a great poet, a man of the permanent, daily chronicle, of the small, the great events were written by the minimal look of Earle”, affirmed Rodríguez.

On his part, Diosdado Cabello, stated that «it hurts us deeply to be here, Earle would not like us to dismiss him in sadness.»

«With Earle we fought countless battles in the human, in the political, in the humor, but always in loyalty, firmness, trust, belief in his revolutionary values ​​and principles,» he said.

He recalled that Congressman Earle Herrera was characterized by his extraordinary solidarity and by deeply appreciating friendship. «It is a red flag of dignity, a red flag of Homeland,» said Cabello, urging people to remember him as a great revolutionary.

Venezuela denounces the application of unilateral coercive measures as a driving mechanism for inequality, systemic racism and perpetuation of colonialism

Maduro: We have issued an energetic protest against the Argentinean Government's cowardice against Delcy Rodriguez 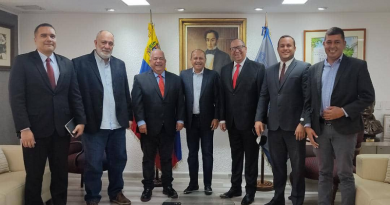