The secretary general of the United Nations (UN) has repudiated any attempt of a foreign military intervention in Venezuela:
«I hope that does not happen. The era of foreign military interventions in Latin America passed a long time ago», answered on Tuesday the UN Secretary General, Antonio Guterres, to a question about the risk of an internal or foreign military confrontation in Venezuela, a country that is going through turbulence. politics, by a self-proclaimed government, supported by the United States.
On Sunday, US President Donald Trump reaffirmed that a military intervention in Venezuela is «an option» that has been considered in the face of the political crisis in the South American country.
Guterres, who made these statements to the US media Voice of America (VOA), stressed the strong call of the UN to all parties to avoid any form of violence that, as the secretary general stressed, does not serve nor benefits anyone.
«I think it is important for the UN to reaffirm the availability of its good offices to support any negotiation between the two parties to find a solution. The Venezuelan people needs it and deserve it», he said.
The diplomat stressed the dialogue to reach a solution to the crisis generated on January 23, when Juan Guaidó, head of the Venezuelan National Assembly (AN) -declared in contempt since 2016 and controlled by the opposition- proclaimed himself as «interim president»of the country, with the permission of the United States.
Despite the repeated call by Venezuelan President Nicolás Maduro to enter into a dialogue with the opposition, they refuse to sit down at the dialogue table and seeks the end of the Maduro Government, as Washington puts it.
The US vice president, Mike Pence, said on Friday that «it is not time for dialogue, it is time for action» against the Government of Maduro, elected in democratic elections that were held last May.

Venezuela urges to take forceful actions before fires in the Amazon 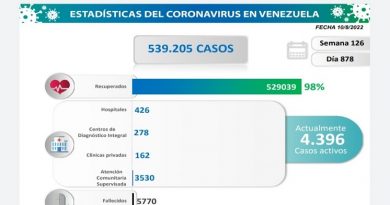 Venezuela denounces to the UN persecution in Colombia against Venezuelans

Was installed the Statistical Committee for the social area

Imperialism will not put its hands on Venezuela or Cuba