China opposes the unilateral sanctions against Venezuela imposed by the United States, as said the spokesman for the Chinese Foreign Ministry, Geng Shuang, during a press conference on Tuesday.
«We oppose unilateral sanctions. History has shown that the intervention or the imposition of sanctions has only complicated the situation and could not solve the problem», he said.
«The sanctions will lead to a worsening of the population’s life [in Venezuela]. [The countries that promote the sanctions] will have to answer for the serious consequences that will result», he stated.
Cooperation in all areas:
In addition, the spokesman reiterated that Beijing will continue working together with Caracas despite the aforementioned restrictive measures: «The Chinese side will continue to cooperate with Venezuela in all areas in conditions of equality, mutual benefit and general development», he assured.
John Bolton, national security adviser to the US president, Donald Trump, announced on Monday the imposition of sanctions against Petroleos de Venezuela S.A. (PDVSA).
The restrictive measures include the freezing of about 7,000 million dollars in assets of the Venezuelan state-owned company, in addition to an estimated loss of 11,000 million dollars of its exports over the next few years, as detailed the US Secretary of the Treasury, Steven Mnuchin.
The announcement comes amidst a series of statements from the White House in support of opposition deputy Juan Guaidó, who last week proclaimed himself as «president in charge» of Venezuela.
The situation of Venezuela:
– On January 23, Juan Guaidó, opposition leader and president of the National Assembly, which has been in contempt since 2016 and whose acts are null and void according to several sentences of the Supreme Court of Justice, proclaimed himself as «president in charge» of Venezuela amidst a demonstration in Caracas.
– His legitimacy to head Venezuela has been recognized by the United States. and a series of Latin American countries.
– Nicolás Maduro announced that Venezuela breaks diplomatic and political relations with the United States.
– The US Secretary of State Mike Pompeo announced during a session of the Organization of American States (OAS) on Thursday that Washington is ready to provide Venezuela with humanitarian aid worth more than 20 million dollars.
– At the close of the session, 16 of the 34 members of the OAS officially recognized Guaidó as interim president of Venezuela through a resolution signed by Argentina, the Bahamas, Brazil, Canada, Chile, Colombia, Costa Rica, Ecuador, the United States, Guatemala, Haiti, Honduras, Panama, Paraguay, Peru and the Dominican Republic.
– From the European Union they have avoided explicitly recognizing Guaidó as the interim president of Venezuela. The High representative of the block for Foreign Affairs and Security Policy, Federica Mogherini, has spoken out in favor of free elections in the South American country.
– On the other hand, from the governments of Mexico, Bolivia, Cuba, Iran, China and Russia have advanced that they will not recognize Guaidó as president. In addition, Maduro revealed that he received a call from the President of Turkey, Recep Tayyip Erdogan, expressing his support.

Arreaza responds to Trump in the UN: We are ready to defend our sovereignty 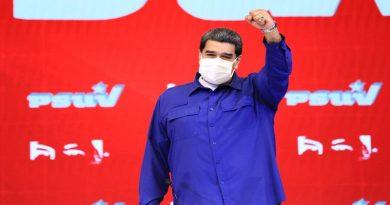 PSUV will make history in matters of direct and popular democracy

Rodríguez: in October the People decides between peace and riots