The constituent lawyer Hermann Escarrá said on Wednesday, January 23 that «the last two decisions of the Supreme Court of Justice were very clear: While (the National Assembly) remains outside the Constitution and in contempt, none of its actions are valid. They are null and nonexistent».
He assured that the National Assembly must fulfill the functions assigned to them, and not dedicate themselves to usurp the functions that do not correspond to them. The current directive of the Venezuelan Parliament made decisions that lack legality, such as the substitution of the constitutional President of the Republic in order to create a Transitional Council, something that lacks legality, as sentenced the constituent.
He also recalled that in the last elections held on May 20, 2018, was given full legitimacy to the President of the Bolivarian Republic of Venezuela, Nicolás Maduro, as it was a totally democratic electoral process, in which was transparently expressed the will of the Venezuelan men and women.
To conclude, he stressed that from the National Assembly is intended to carry out a coup d’etat: «However, the truth is that they will not succeed in ousting President Maduro, they will not be able to comply with the orders that they have been given from the empire». 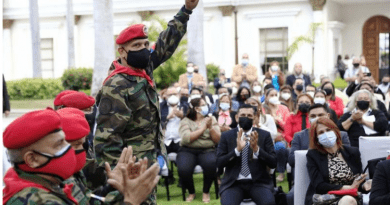 Presidential Commission for the prevention of Covid-19 met this Monday

On December 9, members of municipal councils will be elected