The Bolivarian Republic of Venezuela overwhelmingly rejected on Thursday the expulsion of Ambassador Carol Delgado, representative of the country in Ecuador.

«The Office of the Deputy Minister for Latin America of the Ministry of People’s Power for Foreign Affairs, on behalf of the Government of the Bolivarian Republic of Venezuela has learned of the extravagant decision of the Government of the Republic of Ecuador to declare as Persona Non Grata the Ambassador of Venezuela in said country. In this regard, is stated the following:

The intolerant and disproportionate reaction of the Government of Ecuador is striking, given the scientific and rational dismantling carried out by the Minister for Communication and Information, Jorge Rodríguez, of the unusual figures announced by the President of Ecuador, Lenin Moreno, on September 25 at the headquarters of the United Nations, regarding the migration of Venezuelan citizens.

From the sacred podium of the United Nations, the president of Ecuador, Lenin Moreno, in an unprecedented act of aggression against Venezuela, spent a quarter of the time of his speech to lie about the reality of the migratory phenomenon. He lied about the volume of Venezuelan migrants, establishing an interested number that, illogically, exceeds all feasibility. He also lied about the alleged and never demonstrated attention received from his Government. He lied about the health conditions of Venezuelans who travel through the Ecuadorian territory and attacked with tendentious slander the honorability and popular character of the Bolivarian Government of Venezuela.

It is evident that all this fallacious and hostile argument, as well as this unprecedented act that threatens the historical relations of brotherhood between the two Bolivarian countries, are mere consequence of the new role that was assigned to the Ecuadorian government after the visit of the Vice President of the United States, Mike Pence in the fulfillment of the plan designed by Washington and executed by some submissive governments in the region, with the aim of forcing an unconstitutional change of regime in Venezuela.

In these circumstances, the Bolivarian Government of Venezuela can do nothing else but rejecting the systematic interference in its affairs by President Lenin Moreno, as well as the expulsion of its Ambassador in Quito, before which it is forced to take reciprocal action against the Charge d’Affaires of Ecuador in Venezuela, Elizabeth Méndez, who is declared Persona Non-Grata, and who has 72 hours to leave the country.»

«The falsehood, the insult, the slander, in its most disgusting and immortal phases, have been the weapons favored by our adversaries». Eloy Alfaro

Reopened crossing of the Colombian-Venezuelan border this Saturday 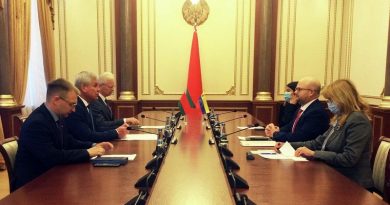 President Maduro: More than 90% of the Orange Alert is active

Russia has given Venezuela a solid and definitive support