The project of Constitutional Law against Hate, Intolerance and for Peaceful Coexistence, debated in the National Constituent Assembly (ANC) and currently under public consultation, is supported by a 60% of Venezuelans.

Thus is stated in the most recent Country Monitor survey conducted by Hinterlaces between August 18 and 30, with some 1,580 direct interviews, and the results of which were announced by José Vicente Rangel during his Sunday program, «José Vicente Hoy» (José Vicente Today).

At the end of this section of the program broadcast by Televen, Rangel said that only a 33% of the people interviewed expressed their disagreement with this legal instrument that will stop the campaign of hate and violence promoted by extremist sectors of the opposition, which has generated in the last months the burning of living people and murders for being tagged as «chavistas», and vandalic acts that have left a balance of more than 100 deceased and about a thousand injured.

He added that the survey showed that 65% of the population said that those responsible for these events, which have also generated millionaire damages to public and private assets, should be arrested.

Of the total of respondents a 29% said they should not go to jail, while the remaining 6% did not respond or said not to know. Similarly, to the question: «How would you rate the performance of the National Constituent Assembly until now?», Rangel reported that a 59% answered between «very good», «good» and «fair to good», compared to a 38% who answered «regular to bad» (9%), «bad» (10%) and «very bad» (19%); the rest did not answer. 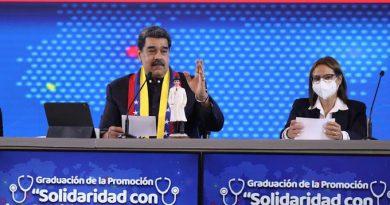 Hinterlaces: 71% of voters trust Nicolás Maduro will triumph on May 20

CLAP stores will have presence all throughout the country