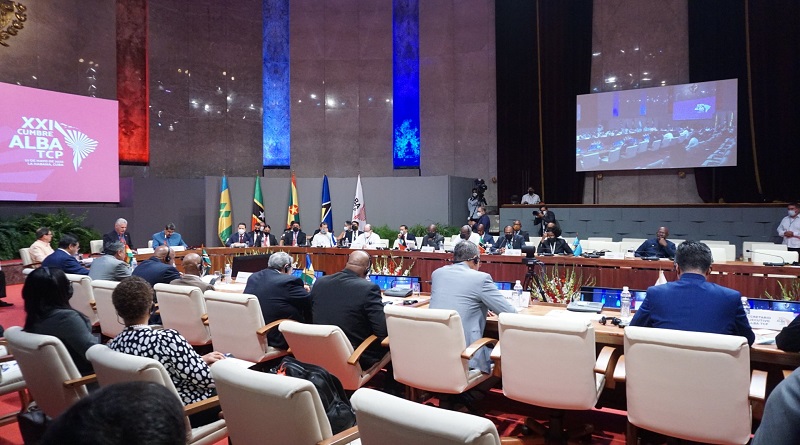 The final declaration of the 21st Summit of the Bolivarian Alliance for the Peoples of Our Americas-People’s Trade Treaty (ALBA-TCP), entitled «ALBA-TCP repudiates the exclusions and discriminatory treatment in the so-called Summit of the Americas in Los Angeles”, supports the right of all the countries of the continent to participate in the Summit of the Americas on equal terms.

The executive secretary of ALBA-TCP, Sasha Sergio Llorenti, read the final minute in which the heads and representatives of the Latin American and Caribbean States ratified their commitment to strengthening this regional integration that constitutes a zone of peace.

In this sense, ALBA-TCP supports the claims of the countries of Our Americas, to materialize a change in hemispheric relations based on the Charter of the United Nations and International Law.

The heads of government reaffirm their support for multilateralism, as the main instrument to face the multifaceted and complex global challenges through collective action.

Likewise, they rejected the arbitrary, ideological and politically motivated exclusion of several of our countries from the so-called Summit of the Americas to be held next June in Los Angeles:

The members of the summit also denounced the discriminatory treatment of the US as the host country of the Summit of the Americas against numerous representatives of the genuine civil community of the continent. Therefore, they emphasize that this type of exclusive meeting does not contribute to the solution of any of the urgent challenges of integration before the regional and global ones.

Finally, ALBA-TCP supports and appreciates the courageous and dignified position assumed by governments, social actors, organizations and sister peoples of the continent that have strongly and in various ways rejected the exclusions from the meeting in Los Angeles.

“I share the declaration of the 21st Summit of Heads of State and Government of ALBA–TCP. With a solid and courageous voice, an entire continent unites to defend the dignity and truth of free peoples. This is the century of union and the end of hegemonism”.

Venezuela strengthens ties for the stability of oil market

Arrested 86 citizens linked to extraction smuggling of the monetary cone

Eighth star of the National Flag, a recognition to the brave land of Guayana

ALBA-TCP and SADC will work in various areas

New pricing system will be anchored to Petro