The Constitutional President of the Bolivarian Republic of Venezuela, Nicolás Maduro, held on Thursday night a meeting with the members of the delegation of the Venezuelan Government before the dialogue table installed in Mexico with the opposition.

The work meeting took place in the prelude to the new meeting between both parties to be held from today until September 6 in the Aztec nation after the first phase of constructive talks held last August, during which they sealed an understanding memorandum that will mark the development of this dialogue for agreement and peace.

In a message published through his account on the Twitter social network @NicolasMaduro, the national president indicated that in this meeting, they analyzed the final details of the petition document to be presented in Mexico to the new round of dialogue with opposition sectors.

“In a work meeting, we refined the last details of the Petitions Document that we will take to Mexico, for the new journey of negotiation with the opposition sectors. We will continue to advance in the dialogue, the Peace of the nation and the common good of all”.

The president of the National Assembly and plenipotentiary representative of Venezuela in the dialogue, Jorge Rodríguez, participated in this meeting in Miraflores; the governor of Miranda state, Héctor Rodríguez; the Minister of People’s Power for Science and Technology, Gabriela Jiménez; deputies to the National Assembly Nicolás Maduro Guerra, Francisco Torrealba, Génesis Garrett and Diva Guzmán; the Executive Secretary of the National Human Rights Council, the Vice Minister for Anti-Blockade Policy, William Castillo, the first combatant woman Cilia Flores and the Executive Vice President, Delcy Rodríguez.

In this regard, the Venezuelan Head of State announced, hours before this appointment, that “would be approved the document and petition that we will take to the dialogue table, of economic demands for Venezuela”.

He also recalled that the second meeting for dialogue in Mexico «is the product of a lot of effort, work, dedication and patience (…) we have had to swallow several toads with soil included, for peace, for reconciliation, democracy, the recovery of Venezuela».

Russia qualifies as unacceptable any claim of military intervention against Venezuela 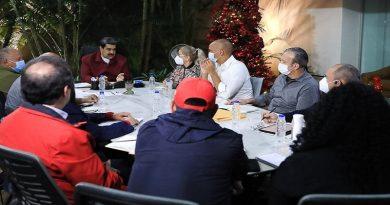 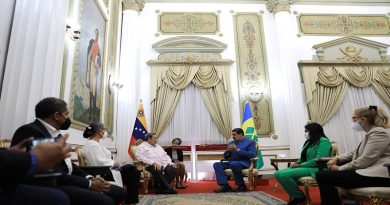 With registration of candidacies to the regional ones, opposition acknowledges CNE and the ANC

Working class has defeated the strike called by the opposition