Venezuela’s ambassador in Spain, Mario Isea, said on Tuesday night that the world knows the onslaught that is being lived by the nation, «the peoples of the world living in a democracy such as that of Venezuela can resolve situations such as the one that is currently being experienced. »
He noted that since the arrival of Commander Hugo Chavez to the Presidency of the Republic, started a campaign against Venezuela through international media and which now has intensified under President Nicolas Maduro.
Isea said that the Head of State, Nicolas Maduro «Has denounced that media onslaught that in Spain is expressed with brutality, no day passes on that is not on the front page a story dedicated to misrepresent the truth, promoting hatred and negative matrixes «.
He stressed that the economic war that lives Venezuela has its beginnings in the mineral resources that the international corporations want to put their hands on.
«Economic problems can not be an excuse to invade as happened with Libya, it is necessary to prevent the Empire from occupying spaces of the territory,» said the diplomat.
The statements were issued on Tuesday at the «En la Palestra» (In the Board) program, broadcast by Radio Nacional de Venezuela in its information channel. 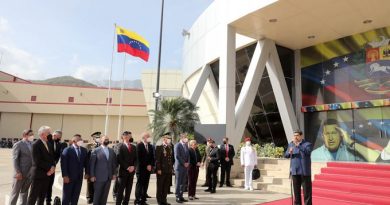 President Maduro upon arrival in Venezuela: A pluricentric and multipolar world has already emerged

Venezuela discussed at the UN advances in public defense

Maduro: Gold Plan could generate wealth of around 5 billion dollars