The President of the Republic, Nicolás Maduro, called on Tuesday for a great regional dialogue, with the objective of strengthening the relations of the countries that make up the continent.

In a joint radio and television broadcast, held from the Casa Amarilla (Yellow House, seat of the Chancellory) in Caracas, the Head of State asked the Bolivarian Alliance of Peoples of Latin America (Alba-TCP) to promote the necessary mechanisms to restore the rules of frank dialogue, based on respect and fundamental principles of international law.

«The continental right wing broke the rules of play of coexistence. I believe that a regional dialogue is necessary, and I propose to the Alba and to the powerful leaders of the countries present here, that we initiate, with your initiative, a dialogue for the respect of Venezuela. For a dialogue to be initiated with the Governments of Mexico, Peru, Argentina, Chile, Paraguay, and as a single point, to restore the norms of respect for international law and the established and effective principles of the charter of our Community of States and Caribbean», expressed the National President.

During his participation in the 6th Extraordinary Meeting of the Political Council of ALBA-TCP, President Maduro expects that a summit will soon be held in San Salvador, in order to «restore the paths of Latin America again».

On the other hand, he reiterated his rejection of the interventionist attempts perpetrated by the Organization of American States (OAS), an instance that has put pressure on the member countries of this international organization to execute illegal sanctions against Venezuela.

«The OAS has failed, and will continue to fail in its attempt to intervene in Venezuela and end the Bolivarian Revolution. They have not been able, nor they will be able to defeat Venezuela, nor Latin America and the Caribbean», he said.

Unity of the peoples of the region will curb imperial attacks

International supporters ratify their support for the Venezuelan electoral system 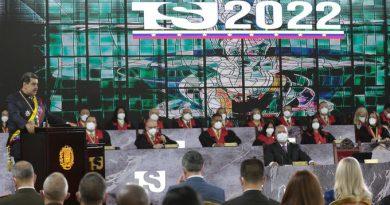 Head of State: Venezuela has the most powerful Judicial Power in history