The President of the Bolivarian Republic of Venezuela, Nicolás Maduro, denounced the attack on the headquarters of the Supreme Court of Justice (TSJ) and the Ministry of People’s Power for Interior Relations, Justice and Peace (Mppijp).

This Tuesday’s afternoon, from a helicopter with initials of the Corps of Scientific, Criminal and Criminal Investigations (CICPC) that flew over the headquarters of the institutions, were thrown grenades and shots with guns.

Against this fact, the Head of State announced that was activated the air defense plan. He further informed that the competent authorities are in full investigation.

The National President said that have already been identified those responsible for the subversive act, headed by the pilot of former Minister Miguel Rodríguez Torres, who confessed on Sunday to have relations with the CIA.

He made a call on the Board of Unity (MUD) to take a stand against this terrorist act.

2,949 Venezuelans have been repatriated with the Vuelta a la Patria Plan

The truth of Venezuela must impose against foreign aggression 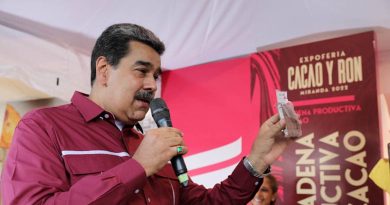 President Maduro announces exemption from taxes on cocoa and derivatives