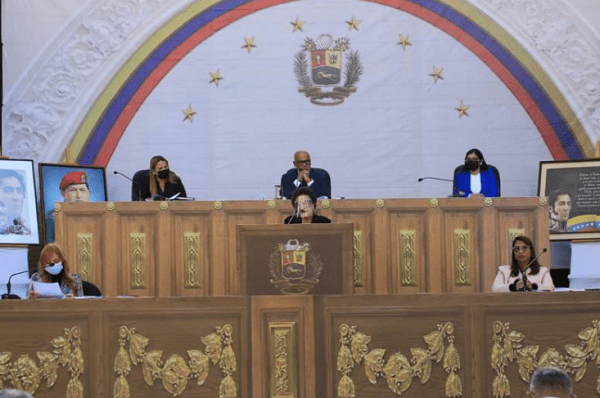 The special commission of the National Assembly (AN) that investigates the crimes perpetrated against the country by the directives of the 2016-2020 term, presented a report with the actions to the detriment of the Republic, executed by the extreme right wing.

The document was approved unanimously, and the president of the commission, José Brito, during the ordinary session this Thursday, specified that there are 442 involved in the investigation; 203 are former deputies men and women.

In addition, 239 are people designated by former deputy Juan Guaidó as false ambassadors and diplomatic representatives of Venezuela, under the alleged internal government.

He added that new investigations may include more people with an estimate of at least 1,600, and that includes political leaders such as Ramos Allup, Leopoldo López, Julio Borges and Governor Manuel Rosales, the latter regarding the bankruptcy of the Monómeros company.

In this regard, the Colombian government of Iván Duque planned and acted with treacherous premeditation to seize the company: «Sooner rather than later, Colombia will have to return Monómeros to Venezuela”, he emphasized.

In the theft plan, there is a description to acquire vaccines against Covid-19, however, none were brought into the country. The fight of the groups of the extreme right wing for the «distribution of the loot» was public and notorious, he added.

Brito asked to create links with the competent entities of the State to present the report, because many of those involved are susceptible to a political declaration and pointed out that facts about the case are still being raised.

The vice president of the commission, Hugbel Roa, added that the report contains 12,000 pages of a detailed investigation in which they refer to evidence with their respective arguments.

Deputy Bernabé Gutiérrez pointed out that justice must be done against the «criminals, thieves and corrupt» who continue «laughing at those who administer justice”.

Likewise, the first vice president of the National Parliament, Iris Varela, stressed that the people are crying out for justice for the blockade that has caused the death of thousands of Venezuelans.

The NA, with an opposition majority between 2016 and 2020, sought to destabilize the country, to which was added the self-proclamation of Juan Guaidó on January 23, 2019, with the argument of liberating Venezuela.

This has allowed the confiscation of Venezuelan resources in the last three years with the support of the US and other governments such as Colombia.

This has involved the freezing of assets in Portugal, USA and, among others, the illegal retention of 31 tons of gold in the Bank of London, UK.

Maduro: In Venezuela will not enter any invading soldiers

The true triumph of the revolution lies in maintaining peace