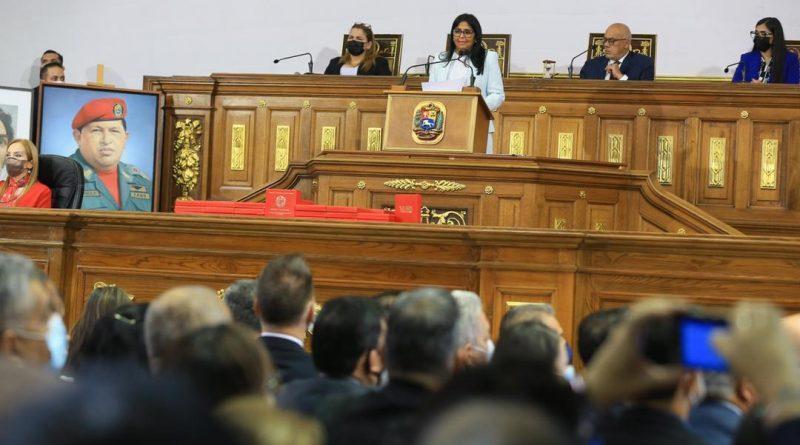 This Tuesday, in a special session of the National Assembly (AN), the Vice President of the Republic, Delcy Rodríguez, delivered the reasoned and sufficient reports of the management of ministers of the Executive Cabinet, rejecting any form of economic aggression, illegal sanction and unilateral coercive measures and extortion actions that attempt against the full enjoyment and enjoyment of the rights of the people.

During her intervention before the Parliament, Rodríguez asserted that between 2014 and 2021, 502 unilateral coercive measures were executed against Venezuela, most of them concentrated on public finances, oil and government institutions.

She pointed out that the measures attacked 25% in finances, 22% in oil and that these were not only seeking financial suffocation, because the health sector represents 10% of this conglomerate, food 7%, private sector 7% and public services were severely affected.

She explained that when the country sells crude oil, the sales costs represent 25%. It is the amount that Venezuela must pay for the sale of its crude oil, that is, 1 out of every 4 dollars is destined to cover payments for the mobilization and commercialization of oil. She also referred to the theft of 31 tons of gold by the Bank of England.

She explained that 2020 was the year of the intensification of the criminal blockade, but 2021 was the year of inflection, recovery and progress. She specified that a sign of this is that the Patria System delivered 600 million bonds to 13 million people, and in four years the CLAP system has increased by 44%.

Regarding the electrical system, she said that the sector managed to recover 22%, and in water distribution it recovered 18%. Regarding the booster doses against Covid-19, she indicated that Venezuela has reached 105% of its objective goal.

She added that an essential aspect is the progressive recovery of productive sectors, including oil production, which by December 2021 reached one million barrels. And as a goal for 2022, production is two million barrels.

She stressed that there is a special international situation that is impacting the world economy, in turn affecting the price and distribution of food. She pointed out that the results of the economic aggression against Russia are already beginning to be seen, consequences of an international conflict that, in her opinion, could have been avoided if international agreements had been respected.

Executive made launching of the National Mining Plan 2019-2025

9,458 nationals returned to the country thanks to the Vuelta a la Patria Plan

Unes arrived at its 13th anniversary with more than 54,000 students throughout the country