The President of the Republic, Nicolás Maduro, paid honors this Monday to deputy and journalist Earle Herrera, who gave the step to eternity this Sunday in the city of Caracas.

During the burning chapel held at the Federal Legislative Palace since Monday morning, the Head of State emphasized: “Earle Herrera was a man of great commitment, a thorough and integral militant of our Revolution. Earle lived his life extensively, he fulfilled the mission that he had to fulfill, he has left us a legacy and we must take him as an example and impetus in the battles to come for our freedom, for our sovereignty”.

During the formal ceremony, the National President awarded him the post-mortem Liberator Men and Women of Venezuela order – Spade, in the first class, which was received by his son, Simón Ernesto Herrera Venegas.

Earle was the Aquiles Nazoa of our time. He was a humble and irreverent man. He dreamed since the 70s (…) From Earle we only knew lessons and teachings”, said Maduro.

«He blushed when one told him so (…) what would Earle himself be saying and writing about his funeral and these words that we with our hearts in hand are saying about him”, revealed the national president.

The Head of State stressed that since Commander Hugo Chávez came into power with the Bolivarian Revolution, and along with other revolutionaries, Herrera made himself known in the Legislative Power and from that space he fought the battle to re-found the Republic.

He recalled that Herrera was co-editor of the Bolivarian Constitution and its chapters on education, culture and the social rights of the people:

«An important parliamentary political leader of the country. He was always willing to be on the front line, and he never abandoned his work as a creator in which he posed criticism, self-criticism and ideas with humor. He was the best chronicler of the Revolution, the man who picked up the simple things. He was a studious man, dedicated to his trade, he studied history deeply, defender of the rights of Venezuela on Guayana Essequiba. Without a doubt, he left a mark on each one of us”, he added.

Earle Herrera was a revolutionary militant, deputy, writer and journalist. In addition, among other responsibilities, he was elected and became a member of the 1999 and 2017 National Constituent Assembly (ANC).

Maduro summed it up as an example of the unitary left of Venezuela that «had his feet on the ground and his heart that stood up yesterday, he always beat for that love he felt for our country.»

Nicolás Maduro: There was no better way to say farewell to Fidel 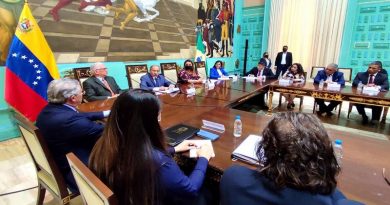 Vertices of Great Mission AgroVenezuela will be debated next week

Strike promoted by the right wing has been a total failure