The Secretary General of the Organization of Petroleum Exporting Countries (OPEC), Mohammad Barkindo, arrived this Tuesday in the Bolivarian Republic of Venezuela, where he was welcomed by the Minister of People’s Power for Foreign Relations, Félix Plasencia, to begin an official visit during the which is planned to hold meetings with the highest authorities of the country, among them the Sectoral Vice President of the Economy and Minister of the People’s Power for Petroleum, Tareck El Aissami.

Barkindo’s visit takes place within the framework of the 61st anniversary of the creation of OPEC, where our country has played a role as a leading actor, being a founding member and always acting in strict adherence to the founding principles that gave rise to this important organization that promotes stability in the world energy market.

This scenario has been strengthening since 2019, after the historic decisions taken within the framework of OPEC+ and which constitute the determination of oil-producing countries to contribute to the balance of the world economy.

OPEC was born on September 14, 1960, in Baghdad, the capital of Iraq, under the leadership of Venezuelan Juan Pablo Pérez Alfonso and Saudi Abdullah Al Tarik, precursors of this idea that formally incorporated Iran, Iraq, Kuwait, Saudi Arabia and Venezuela in its first steps.

Currently, this intergovernmental organization is made up of 13 member countries, which act in a determined and unified manner to promote a sustained balance in the international oil market, in defense of the right of the peoples to achieve a fair and balanced development. 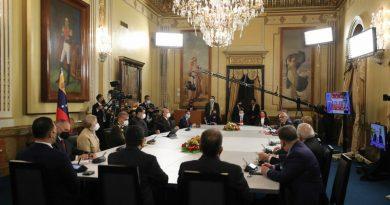 Maduro: A year ago the strength of the civic-military-police union prevented a bloodbath

President Maduro: I am ready to talk with Trump based on respect

There will not be a revoking referendum this year