“PDVSA is not bankrupt, what it is is being attacked, blocked, besieged. PDVSA is ready to produce 2.5 million barrels of oil per day ”. Thus was stated by President Nicolás Maduro during a productive work jouenry aimed at the production and distribution of food for the Venezuelan people.

“Claudio Fermín, Henrry Falcón, Bernabé Gutierrez, (are) again with demagoguery. I am outraged that they try to seek votes with the suffering of the people. Cruel speeches that offend the dignity of the people ”, expressed Maduro.

The president explained that PDVSA has been affected by the oil persecution by the opposition and the North American empire to break the Revolutionary government. “You are the ones who are broke, as demagogues, as politicians and leaders. Instead the working class is ready and willing to recover oil production,» he lashed out at the opponents.

He pointed out that the opposition candidates intend to take advantage, despite knowing how the country has been attacked through unilateral coercive actions promoted by the United States government. 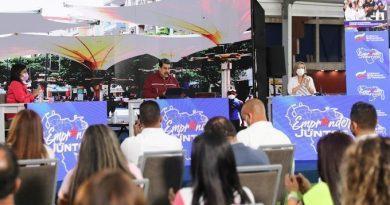