The Ombudsman began an investigation after the death of the corvette captain Rafael Acosta Arévalo, who was detained in the Military Counterintelligence Directorate (DGCIM) for his alleged involvement in the assassination attempt against the president of the Bolivarian Republic of Venezuela, denounced last week by the National Government.
Through a statement, the Ombudsman exhorted «the State security organs to optimize all their efforts in order to prevent violence and ensure the life, health and physical, mental and moral integrity of all people, especially those who are deprived of liberty or in custody».
Earlier, the Public Ministry reported that Lieutenant (GNB) Ascanio Antonio Tarascio and second sergeant (GNB) Estiben José Zarate, both officials assigned to the DGCIM, were charged for their alleged involvement in the incident on Saturday.
Both citizens were accused of the crime of pre-intentional homicide, due to the grounds established and sanctioned in article 410 of the Criminal Code.
Due to the investigations, the 36th Court in Control Functions of the Metropolitan Area of Caracas agreed on a preventive custody judicial measure of liberty against the citizens, whose place of confinement will be the headquarters of the General Directorate of Military Counterintelligence.
Following, the complete text:
«The Office of the Ombudsman of the Bolivarian Republic of Venezuela informs the national community that, on Saturday, June 29, 2019, an ex officio investigation was initiated after hearing of the death of citizen Rafael Ramón Acosta Arévalo, detained at the Military Counterintelligence Directorate, a fact happened at dawn on the same day this year.
The Ombudsman’s Office, as a watcher of human rights in Venezuela, calls on the State security organs to optimize all their efforts in order to prevent violence and guarantee life, health and physical, mental integrity and morals of all people, especially those who are deprived of their liberty or in their custody.
Likewise, the Ombudsman’s Office urges the entities of the justice system to guarantee due process, which must be applied in all judicial and administrative proceedings, in order to comply with the effective protection of the State and respect for the human rights, in order to achieve an expeditious justice, without undue delay.
Likewise, this National Human Rights Institution is aware that the Public Ministry, with the pre-eminence of the case, has initiated the pertinent investigations and has requested the preventive detention of two officials assigned to the DGCIM, which was agreed by the Control Court, while perform the necessary expertise to determine the causes of death and the responsibilities that are taking place.
Finally, the Ombudsman’s Office expresses its words of condolences to relatives and friends of the citizen Rafael Ramón Acosta Arévalo, and reiterates its commitment to continue monitoring in relation to this case, as well as the situation of all persons deprived of their liberty».
Caracas, July 01, 2019 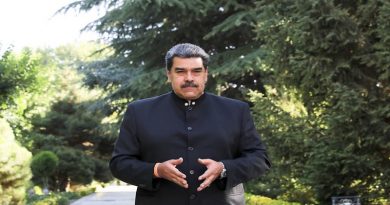 CICPC shows the other side of scientific research: Expo Criminalistics 2018

Venezuelan opposition seeks a coup d’ etat in the country