After the meeting held by the Presidential Commission with bondholders and creditors in the White Palace, Caracas, the Venezuelan Government issued an official communiqué in order to publicize the start of the process of refinancing Venezuela’s foreign debt.

Following, the full text of the document:

«The Government of the Bolivarian Republic of Venezuela wants to inform the world that today, at the Government Palace of Miraflores, the process of Refinancing of Venezuela’s external debt began with resounding success, as a strategy to fully comply with our obligations, despite the attempts to impede it made by the Office of Foreign Assets Control (OFAC) an Office depending of the Treasury Department of the Trump Administration, in an attempt to attack the Venezuelan economy and to obstruct what has been a constant in the conduct of Our country with respect to its commitments: we have honored them, beyond the difficulties we face and the blockades that they try to perpetrate with malicious intentions.

In the last 36 months, Venezuela has paid, for the concept of Reimbursed Capital and Paid Interest, the amount of 73,359 million dollars; an immediate consequence of each payment and of each compliance has been the increase of risk in the country by risk rating agencies, which have been profoundly inefficient in preventing scandalous financial losses in centers of financial power in the United States, Europe, and Asia, but which they are used as an instrument of devious action against our country: the more we have paid, even though we have always been punctual in honoring our payments, the risk rating agencies, following the pattern of financial blockade undertaken by the Trump Administration, makes it more expensive to report without any form of rigor and truthfulness, the cost of our debt and intervene to hinder Venezuela, in its capacity as a good paying and solvent country, access to external financing, common and frequent for almost every country in the world.

We qualified this meeting, in which Venezuelan debt holders from Venezuela, the United States, Panama, the United Kingdom, Portugal, Colombia, Chile, Argentina, Japan and Germany participated, as highly positive and very auspicious. Serve this beginning of the refinancing of our debt to ratify our full intention to proceed, as we have always done, with all our commitments, and overcome, through serious, clear and open mechanisms, undertaken in common with our holders, the complexities that have artificially generated those who, from the Trump Administration and their Venezuelan political allies, try to attack our economy and alter the tranquility of our people. They have not achieved it, they will not achieve it, the positive climate in which this beginning of the refinancing process took place indicates that we will go ahead and continue building the Welfare State that the people of Venezuela deserve. « 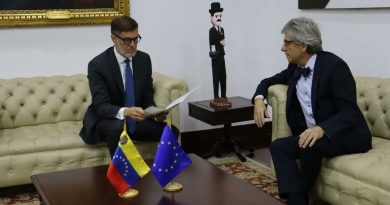 Bolivarian Government will facilitate management of consular procedures in the USA 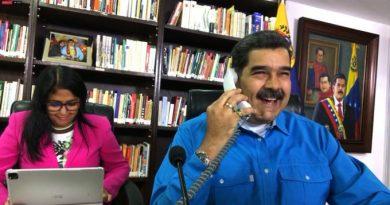 Cabello to right wing: Today's Generals are the 4F lieutenants and captains, make no mistake

Rodriguez: Right wing deputies do nothing to make the country advance