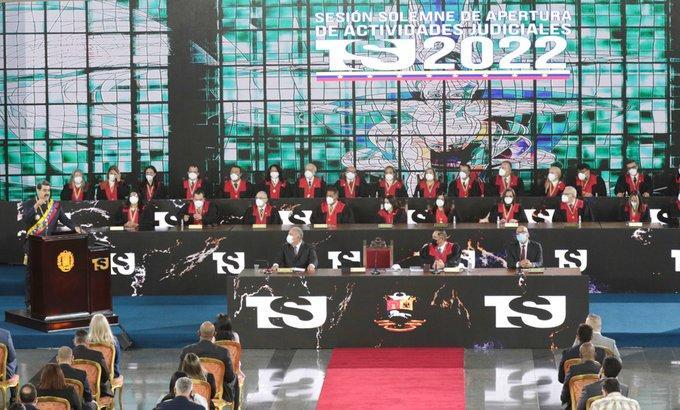 The strategy of the parallel power was pulverized by the revolutionary resistance, as assured President Nicolás Maduro during his intervention in the act of Opening of the Activities of the Judicial Power for 2022 and presentation of the Management Report corresponding to 2021.

In this sense, he insisted on the need to «adapt thought, adapt actions, keep one’s feet on the ground, to understand the new problems that arise, understand the new circumstances and be adapted to the new times that may come, in this case a new time of transition to another world, the new time of transition to the socialism of the 21st century”, he said.

By ratifying his call to strengthen the debate on the 3Rs.nets (Resistance, Rebirth and Revolution) throughout the country, which includes the Public Powers of the Venezuelan State, the National President explained to the audience that these “subsume within themselves the well-known and very successful 3R Squared that Commander Chávez formulated to respond to the Venezuela of 2007, 2008, 2010”.

In the dynamic of strengthening that formula of the Commander, the Venezuelan Dignitary argued that «today I am formulating these to respond to the Venezuela of 2022, 2030 (…) developing the Bolivarian thought, the Chavista thought from the roots towards the future as he always taught us”.

“It has been done in a dialogue, a consensual manner, important measures have been taken to update the legal and legal framework of the country to the most advanced standards in human rights and justice. To adapt all the laws, readjust all the laws to the present times so that the country guarantees a true state of justice, of social and democratic law”, he pointed out from the Central Plaza of the Supreme Court of Justice in Caracas.

Extreme right tried to usurp functions of the Public Powers:

Emphasizing that Venezuela demonstrated the constitutional strength to consolidate social peace and confront the aggressions of North American imperialism, the Head of State and Government, Nicolás Maduro, rejected the claims of the Venezuelan extreme right wing to create parallel Public Powers, under the auspices of the governments of Colombia and the United States:

“I am sure that it will serve as lessons for the peoples of the world so that they face in the future all the weapons of political destruction that North American imperialism has created in the fourth generation and unconventional wars, to appropriate and colonize countries like the has tried against Venezuela”, pointed out Maduro.

The national president rejected the aggressions against the country, since they seek to divide the institutions and demoralize the Venezuelan people: «They tried to create a TSJ, a Public Ministry, a parallel Attorney General’s Office from Bogotá (…) The Colombian narco-oligarchy and the U.S. empire continue to bet on the parallel power that will never take off in Venezuela”.

Venezuela thanks Vietnam for its solidarity, fraternity and respect for a better world

Filed over 10,000 denounces at the prosecution on MUD offenses in collecting signatures

Dialogue, peace and economic recovery: The lines of Maduro for the new Presidential term

Maduro: GNB must preserve the historical consciousness of the direction of the Revolution