The President of the Bolivarian Republic of Venezuela, Nicolás Maduro, said that Venezuela has a solid democracy, a new political culture and a people that has power in its hands.

«So, whatever CNN and the BBC may say, the bunch of plotting governments of the international right wing, the world media; whatever they would want to say. Venezuela has a solid democracy, capable of withstanding national attacks, violence, attempts of coup d’ etat, and capable of withstanding the worst imperialist media lashes ever to be known on any people in 100 years», he said during a work meeting held from Miraflores Palace.

The Head of State said that our country has a more solid democracy than any of the democracies that can be recalled or compared to in the world.

«Venezuela has the best and amplest democracy that has ever had our country in its republican history», he argued.

He recalled that in a month will be held the election of Governors, which represents the 22nd election in 18 years since the arrival of the Bolivarian Revolution.

«So much happiness it gives us to talk of democracy, of the people, of sovereignty, which is expressed in a very clear way in the elections of our people», he said.

Chancellor Arreaza invites peoples, experts and electoral institutions of the world to follow our electoral process

Maduro: We have issued an energetic protest against the Argentinean Government's cowardice against Delcy Rodriguez 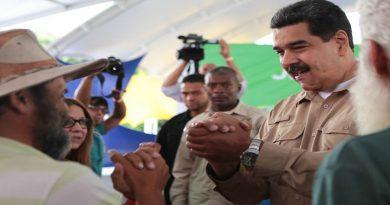