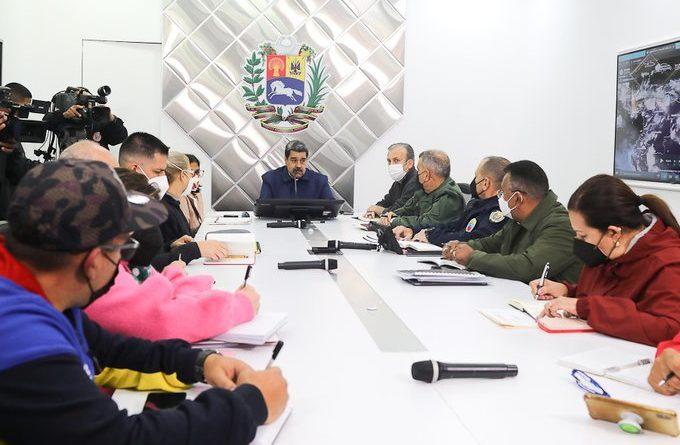 The President of the Republic, Nicolás Maduro, ordered to maintain the deployment of prevention agencies before the passage of tropical wave 41 through the national territory, with priority in 120 municipalities affected by the rainfalls and to provide real-time responses to affected families.

This was announced on the night of this Thursday, October 6, by offering a balance on the attention to the damage caused by the torrential downpours in different entities of the country.

From the Presidential Command Post, he showed images of the damages caused by the rains and interacted with various governors, who presented him with a report on the situation recorded in each of their states.

In his speech, he reiterated that for this year is estimated the presence of 65 tropical waves in the country, of which 41 have been registered so far: «This year in particular has been very strong, it is a consequence of climate change”, he emphasized.

The Head of State stressed that thanks to the preventive actions of the Bolivarian Government, «we have always dealt with the issue of rainfalls, otherwise the disaster would be incalculable, would preventive measures had not been taken to clean everything (sewers, streams) and to attend to people who live in situations of risk, perhaps everything would have been different”.

In a first contact, he spoke with the governor of Carabobo state, Rafael Lacava, who reported on a major landslide in the Boca de Lobo sector, La Sorpresa-Los Muelles section of the Valencia-Puerto Cabello highway.

In this regard, he indicated that the landslide was the product of saturation of the land, which caused large rocks to fall from the mountain, causing the closure of the highway:

«We have not yet been able to remove the rubble, because the mountain continues to drain, stones continue to fall and for the safety of the machine operators, we have to wait until it stops draining,» stressed Lacava.

The regional mandatary also reported that in the El Milagro neighborhood, in the Juan José Mora municipality, as well as in the coastal axis of Carabobo, were the sectors where the highest rainfall was recorded, «it practically did not stop raining for almost 12 hours.»

It also reported that on the road to Trapichito, Miguel Peña de Valencia parish, damage was reported at the «Rolando Carrillo» School: «the river undermined the retaining wall and we are trying to relocate the children to other schools, while we can attend to the situation”, he said.

Given this report, President Maduro expressed to Governor Lacava «count on the resources of the Rains Fund, count on immediate and real-time support», stressing that the solution to the situation at the school is a priority and ordered the Vice President of Security Citizen, A/J Remigio Ceballos Ichaso to support Lacava.

Following, it was the turn of the mayor of Caracas, Carmen Meléndez, who reported that in the last few hours there have been 106 incidents in the Venezuelan capital due to the rains. 35 landslides, 32 trees down. She indicated that two (2) electrical tubes fell and there were 21 areas with affected electrical service. In addition, 25 families with affected homes in La Vega.

For his part, the governor of Miranda, Héctor Rodríguez, reported that several communities in this entity have landslides, «26 roads affected, 18 fallen trees, 9 landslides, 19 affected homes, five of which are at total loss”.

For his part, Víctor Clark, governor of Falcón state, stressed that tropical wave No. 41, «at this time is leaving Venezuelan territory» and pointed out that four municipalities of Falcón are being prioritized for having flooded areas, product of the flood of the Coro river, «being the surrounding communities the most affected» while reporting that 135 families have been assisted, and two shelter centers were activated, «understanding that the rains will continue for the next few hours.»

He added that 14 municipalities have been affected, which has generated 115 flooded houses, isolation of roads, edge failures and falls in some sections.

Finally, President Nicolás Maduro urged governors and mayors, in addition to the authorities in charge, to guarantee protection and social security in the face of recent rainfalls.

“Our people have someone who loves them, who cares for them, who supports them and we have to be active on the ground (…) We do everything out of love, and those who love their people and the Homeland are capable of anything,” he concluded.

Maduro: Only dialogue and peace are the way to defend Venezuela

Nicolás Maduro will not allow imperial actions by the US

Venezuela to Giammattei: «Your government will become another bad taste joke» 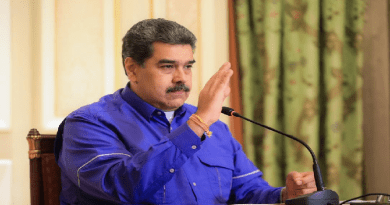 President Maduro highlights the brotherhood of the peoples with Venezuela

Maduro: Campaign against Padrino López is an indicator that we are doing well

Clark: We will continue in the ongoing fight against corruption

Maduro: If they don't meet with requirements there will be no referendum, and that's it