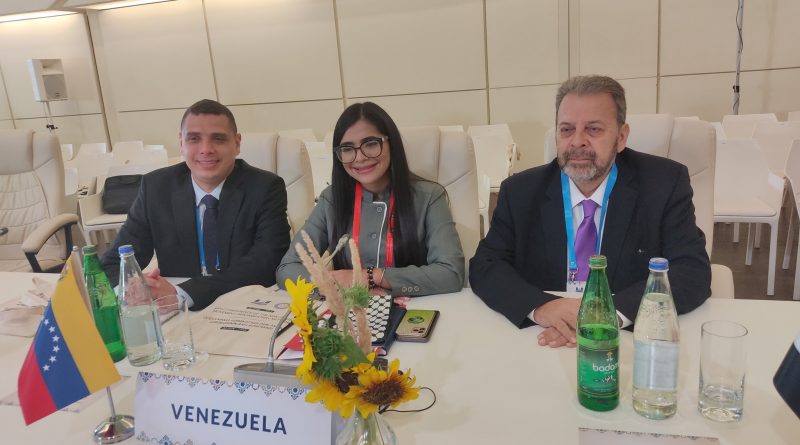 The 2nd Meeting of the Parliamentary Network of the Movement of Non-Aligned Countries to be held in Baku, Azerbaijan, aims to promote cooperation and coordination between the parliaments of the 120 member countries. This was stated by the second vice president of the National Assembly, Vanesa Montero.

The meeting seeks to generate experiences exchanges between parliaments «to continue consolidating peace, security, human rights and sustainable development”, said Montero, noting that Venezuela attends this parliamentary meeting in search of the «construction and consolidation of an extraordinary parliamentary network to strengthen multilateral values”, she said.

For his part, Deputy Timoteo Zambrano pointed out the importance of participating in this kind of multilateral instance, where the world’s nations can debate from the point of view of peace diplomacy:

“It is very important for the Non-Aligned Countries Movement to take a step like the one it has taken, of creating a parliamentary network, and hopefully it will have a greater weight and, above all, be able to have a parliamentary space in which the countries can debate a variety of issues that concern us in each of our countries”, he said.

Likewise, Deputy Juan Escalona highlighted the importance of strengthening cohesion between Venezuela and Azerbaijan, especially after the recent visit of the Venezuelan Head of State, Nicolás Maduro, during his Eurasian tour.

Venezuela reaffirmed commitment to strengthen the agenda with the United Nations

Executive evaluated actions to be executed in the next four months

Venezuela is home to the Encounter of Critical Decolonial Thought

On December 9, members of municipal councils will be elected