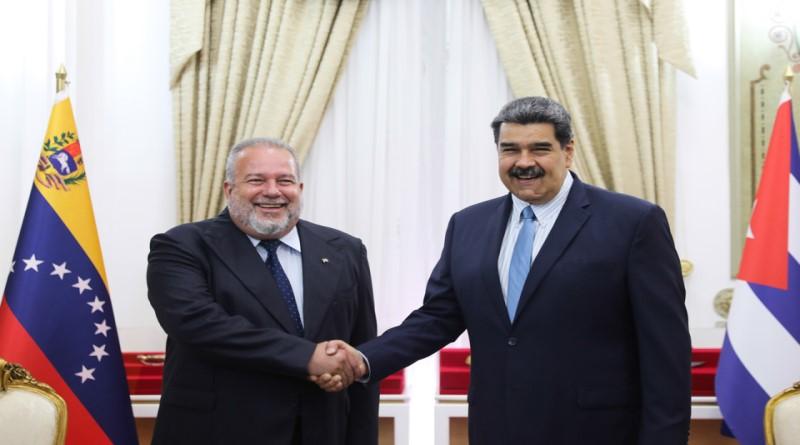 Venezuela and Cuba will advance in the «creative and profound re-foundation» of the bilateral cooperation map, assured this Tuesday the President of the Republic, Nicolás Maduro, after meeting with the Cuban Prime Minister, Manuel Marrero, at Miraflores Palace.

After the meeting, in which participated the Executive Vice President, Delcy Rodríguez; the first combatant woman, Cilia Flores; and Chancellor Félix Plasencia, the Head of State pointed out: «We are going to refound the map of cooperation with Cuba in order to improve, deepen and expand mutual support, together, united, visualizing the rest of this time 2022- 2030”.

He pointed out that this process aims to strengthen cooperation «adapted to a new era», and aimed at positively impacting the social, economic and cultural life «of the people of Cuba and the people of Venezuela.»

During this journey, both officials reviewed the bilateral strategic agenda, as well as current issues in the Latin American, Caribbean and local regions:

“We have reviewed the current world in the east, west, in the south. A good, intense meeting”, affirmed Maduro.

For his part, Cuban Prime Minister Manuel Marrero agreed with President Maduro, and stressed that the refounding of cooperation is due to the change of times: «there is a mutual agreement that it is time to review and see how we adjust to these times».

“Not to weaken that agreement, but to perfect and strengthen it, to see how we identify new things, collaboration and cooperation niches and what we do to continue reinforcing it, especially the impact of that Mission Barrio Adentro”, he added.

President Nicolás Maduro pointed out that the issues of historical cooperation that have been forged in recent years were also reviewed, after the Bolívar-Martí agreement signed by Presidents Fidel Castro and Hugo Chávez Frías since October 2000, when “new fields of cooperation in health, energy, in the economy, education, in culture”.

The Prime Minister of the Republic of Cuba, Manuel Marrero Cruz, is on an official visit to Venezuela, during which he also held a meeting with Executive Vice President Delcy Rodríguez, in addition to paying tribute to the Liberator Simón Bolívar at the Mausoleum of the National Pantheon, and to Commander Hugo Chávez Frías, at the 4F Barracks.

Cuba and Venezuela have developed an intense cooperation agenda throughout 20 years of bilateral relations in terms of respect, shared solidarity, and diplomatic relations based on multilateralism, the self-determination of peoples, sovereignty, independence, and anti-imperialism.

Venezuela will denounce Bank of England for extermination and against humanity

FANB is the largest moral reserve in Venezuela

President Maduro held a meeting with the Iranian Oil Minister