The Minister of People’s Power for Foreign Relations, Jorge Arreaza, denounced this Tuesday that the United States institutions demonstrate themselves the criminal nature of the unilateral coercive measures against Venezuela, misnamed «sanctions», in reference to a report from the Government Accountability Office (GAO), which ensures that “these contributed to the steepest decline in the Venezuelan economy» and limited oil income.

On his Twitter account @jaarreaza, the Chancellor shared press information on the GAO report, which recognizes that the US coercive measures against Venezuela contributed to worsening the deterioration of its economy and created obstacles for humanitarian workers.

The GAO, an agency of the legislative branch that oversees the Federal Government, indicated in its assessment that the Venezuelan economy has «abruptly» fallen since the beginning of Washington’s punitive measures in 2015, especially since 2019.

«Sanctions, particularly against the state oil company in 2019, probably contributed to the steepest decline in the Venezuelan economy, mainly by limiting revenues from oil production,» the report reveals.

Since 2015, the US Government has sanctioned more than 150 people linked to the constitutional Government of Venezuela and revoked the visas of hundreds of Venezuelans. In addition, it imposed illegal coercive measures on the Central Bank of Venezuela and PDVSA, as well as foreign entities doing business with the government or the state oil company. 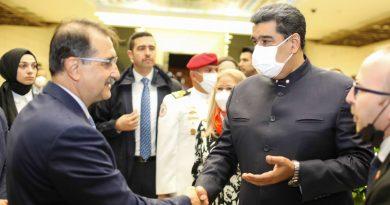 Hinterlaces: 67% of Venezuelans will definitely vote in parliamentary elections

Ricardo Menéndez: «The Bolivarian Revolution Model has been a firm ground to face aggressions against Venezuela»

Maduro: "Do you want to give us humanitarian aid? Then unblock the accounts you have repressed from us"

AN approved Reform of Law against Corruption