The National Government evaluates the reactivation of domestic tourism as of December 1, using strict biosafety protocols in the face of the Covid-19 pandemic, with the intention of stimulating this sector in the Christmas and New Year season.

This was reported by the President of the Bolivarian Republic of Venezuela, Nicolás Maduro, during a productive work journey dedicated to the progress of the Great Mission AgroVenezuela, broadcast by the Venezolana de Televisión (VTV) TV station:

«We are going to gradually reopen the tourist areas as of December 1 through a strict biosafety protocol in order to stimulate the tourism sector at the end of 2020 and during the celebration of the Christmas season,» Maduro said.

The National President announced on Wednesday a set of measures that seek to reactivate the economy and production of all sectors for the Christmas season, using the biosecurity measures recommended by the World Health Organization (WHO).

«We must strongly promote national trade, under a new normal, betting on the real economy and counteracting theft and speculation against the people,» he said. 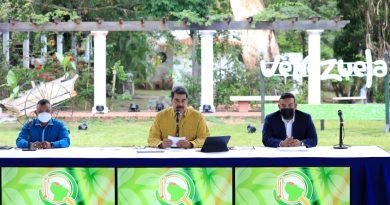 Cabello: Assailants confessed having being deceived