Through a Presidential Decree signed by the Venezuelan Head of State, Nicolás Maduro, this Monday, 110 citizens belonging to the Venezuelan right wing were granted pardons, thus extinguishing the criminal action that falls on each of them. Of the total, 23 of them are main deputies and 4 substitutes, whose benefit measure is carried out with the fundamental purpose of guaranteeing national reconciliation and channeling these sectors into the constitutional path.

The Presidential Decree was read by the sectoral vice president for Communication, Culture and Tourism, Jorge Rodríguez, from Miraflores Palace in Caracas, where he stressed that President Nicolás Maduro “is a true champion in the search for dialogue (…) with the people of Venezuela and with the political actors”, who has convened in more than 600 opportunities for a constructive and fruitful dialogue with the opposition sector so that the constitutional channels are the vehicles to settle controversies among Venezuelans.

In that sense, he confirmed that the Bolivarian Government has been talking to different factors, of which many of them have been assuming a position to participate in the next electoral event called for December 6: «So may the national union be a nationalist sentiment that prevails next December 6 in the parliamentary elections, and may it be the people the one who decides», he added.

He assured that every electoral event is an exchange, a dialogue between the potentially elected: «We Venezuelans decide who we choose or not,» emphasized the Minister for Communication and Information.

The Decree also establishes that an authentic copy be sent to the competent jurisdictional bodies so that they can adopt the corresponding measures in accordance with the provisions of the Organic Code of Criminal Procedure.

Likewise, it orders the police, military and prison service bodies to immediately implement the freedom measures agreed upon by the competent courts for the aforementioned citizens.

The Executive Vice President, Delcy Rodríguez and the Ministers of People’s Power for Penitentiary Services and Interior, Justice and Peace, are in charge of enforcing the Presidential Decree, while maintaining in its fifth article that it will come into effect as of its publication in the Official Gazette of the Bolivarian Republic of Venezuela.

Venezuela and Turkey strengthen ties of economic and cultural cooperation

Let's defeat the terrorist, coup plotting and fascist threats there are on the horizon

Chancellor Arreaza: «The hoarding of vaccines in rich countries puts life at risk throughout the planet» 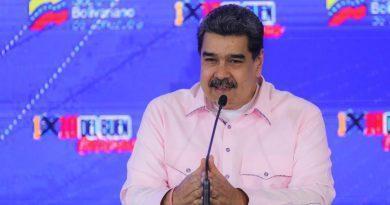 Maduro: The White House warned of the coup attempt

Ultra-right wing has been kidnapped by terrorist groups