The Secretary of the Organization of Petroleum Exporting Countries (OPEC), Mohammad Barkindo, described the unilateral and coercive measures imposed against countries such as Venezuela as «unhealthy.»
From Vienna, Austria, where was held the installation of the 177th Conference of the Organization of Petroleum Exporting Countries (OPEC) and independent producers, Barkindo said that the imposition of sanctions against Venezuela also affects OPEC, which is why he «hopes the discussions between the parties will be resolved amicably and in the shortest possible time», he said in an interview for VTV.
In his speech, the Secretary General of OPEC expressed his solidarity with the president of the Bolivarian Republic of Venezuela, Nicolás Maduro, his government as well as the Venezuelan people:
«We at OPEC show our solidarity with President Maduro, the government and the people of Venezuela. Better times will come for Venezuela, it is a country that has a lot of future», he said.
At the same time, Barkindo highlighted the relevance of Venezuela in what was the foundation of OPEC, which in 2020 will reach 60 years.
«In OPEC we have respected Venezuela and we remember the importance of Juan Pablo Pérez Alfonso, who conceptualized the ideas to found OPEC», he said. 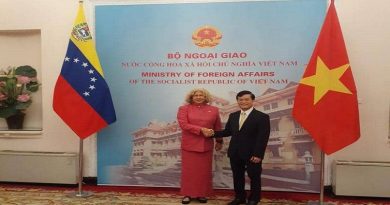 UN report is part of a plan to invade Venezuela

Attack on La Carlota Air Base seeks an international intervention

Delcy Rodríguez to the EU: Never will any power bend my determination as a Venezuelan