The Vice Minister for Latin America of the Ministry of People’sopular Power for Foreign Affairs, Rander Peña, held a meeting Tuesday with the Chargé d’ affaires of the Republic of Chile accredited in Caracas, Roberto Araos.
The meeting resulted in an important dialogue between the parties during which various issues of bilateral interest were addressed, including the need to advance in the respect and recognition of both governments.
The diplomats agreed that the adherence to public international law, respect for the sovereignty and self-determination of peoples is the way to settle any kind of differences.
Vice Minister Rander Peña ratified the sovereign position of the national government and the need for countries that are committed to legality to move away from the extremist positions of governments that undermine international law.
The parties expressed the common disposition to work on consular affairs, for whose purpose the governing bodies are approaching. 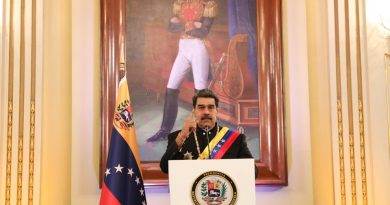 Cuba thanks Venezuela for its solidarity

Pres. Maduro: Nothing nor nobody is going to stop the course of the Bolivarian Revolution