After the start of the new round of talks between the Bolivarian Government and the Venezuelan opposition, in Santo Domingo, Dominican Republic; On Friday, the President of that nation, Danilo Medina, Foreign Minister Miguel Vargas, the former President of the Spanish Government, José Luis Rodríguez Zapatero and the Bolivian delegation arrived at the Convention Center of the Caribbean country on Friday.

The dialogue proposed by the Bolivarian Government was resumed on Thursday with the participation of a delegation composed of the Minister for Communication and Information, Jorge Rodríguez; the Chairwoman of the National Constituent Assembly (ANC), Delcy Rodríguez, and the former Ambassador of Venezuela to the Organization of American States, Roy Chaderton. The opposition is represented by Julio Borges and Enrique Márquez.

In this call it is planned to resume the talks about the Commission for Truth, Justice, Peace and Public Tranquility led by the ANC and the acknowledgement of this plenipotentiary body; the economic, political and electoral guarantees; institutional balance, and the economic and social situation of the country.

It is expected that representatives from Mexico, Chile and Nicaragua will also participate in this meeting.

Maduro: The revolution of FEB-4 marked the beginning of an era on the continent

Maduro proposes to discuss Homeland Plan at the national, sectoral and territorial scale

Venezuela advances in parity and equality between women and men 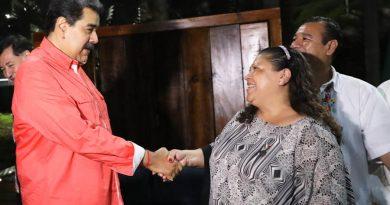 Maduro: Venezuela is stronger than ever despite unilateral sanctions

Venezuela prepares measures to reciprocally respond to US aggression

US attacks exacerbated the patriotic sentiment of the Venezuelan