The constituent and member of the United Socialist Party of Venezuela (PSUV), Earle Herrera, called on the opposition leaders not to give up their space within Venezuelan democracy, for representing this a balance in politics.

«In any democratic regime the opposition serves to calibrate the government itself in the elections, we go to municipal elections and our candidates, without anyone from the opposition, have the mandate done without that evaluation with an opposition candidate», he said.

During an interview in a private TV channel, he said that as a government militant he feels satisfaction when he sees that the opposition elite does not want to be included, but they must respond to their militants, a reason why he thought that the absence would represent a lack to the people that supports them.

«They have renounced to the role that corresponds to them, which is to make opposition, they have done anything: the «exit», coup, «guarimba» (rioting), everything but being an opposition», he added.

Regarding the National Constituent Assembly, the journalist also added that the organization has managed to consolidate peace, so they continue working «in the face of an international economic aggression. The US and the European Union have set out to make the Venezuelan economy scream and we are fighting this aggression», he said.

Vielma Mora: Opening of the border must go through bilateral agreements that envision peace 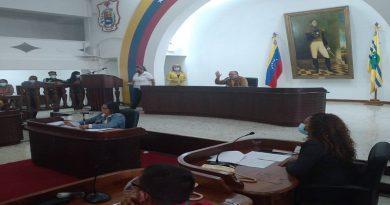 Announced creation of the National Institute of Decolonization of Venezuela

Maduro congratulates the Cuban people for the Day of National Rebelliousness

Chaderton: Result of the OAS is the effect of being ashamed of illegality